The Maoists have, however, not raised any formal demands for the release of the commando as yet.

Manhas was suspected as having been held captive. On Tuesday, the Dandakaranya Special Zonal Committee (DSZC) of the banned organisation released a press note asking for interlocutors.

According to a report in the Indian Express, the CoBRA jawan can be seen sitting on a plastic mat reportedly at the Maoist camp.

Constable Rakeshwar Singh Manhas of the 210th CoBRA battalion, an elite unit of CRPF, had gone missing on April 3 following an encounter with armed Maoists in a forest along the border between Bijapur and Sukma districts in Chhattisgarh. As many as 22 security forces personnel were killed and 30 others injured after the ambush.

The Maoists have, however, not raised any formal demands for the release of the commando as yet.

As per reports, local journalists received calls that the jawan was in Maoist custody on Monday. On Tuesday, the Maoists confirmed it. “The government must declare the names of interlocutors. After that, we will release the policeman in our custody. Till then, he will be safe under our security,” said Vikalp, spokesperson of the DSZC, which had been instrumental in executing several deadly attacks in south Bastar, including the Jhiram valley attack in Bastar district on May 25, 2013, in which top Congress leaders of Chhattisgarh unit were killed.

The Bastar Inspector General however released a statement that described Manhas as a missing person. The statement said that the authenticity of the press note by DSZC was being verified.

“The authenticity of the statement issued by Maoists claiming that they have held hostage the jawan is being verified. Further action will be taken accordingly,” Inspector General of Police (Bastar range) Sundarraj P. told PTI.

Police have been continuously carrying out searches to trace Manhas, and local villagers, social organisations, local public representatives and journalists are also being contacted to locate his whereabouts, the IG said.

“As many as 2,000 police personnel had reached near Jiragudem village to execute a major attack (on Saturday). To thwart them, PLGA (Peoples’ Liberation Guerilla Army) retaliated during which 24 security personnel were killed and 31 others injured. We have caught a policeman (CoBRA commando) at the spot while others escaped,” said the statement purportedly written by Maoists and being circulated on social media on Tuesday.

The ultras also claimed to have seized 14 weapons, 2,000 cartridges and other materials from the encounter site. The photographs issued with the purported statement shows the looted arms and ammunition.

However, sources in police had said at least 12 Maoists were killed in the gunfight that lasted for over 4 hours.

According to the police, ten weapons, including seven AK-47 rifles, two SLR rifles and one Light Machine Gun (LMG), of the security personnel went missing after the attack.

(With inputs from PTI)

Chhattisgarh: Locals Allegedly Beaten up by Police During Gunbattle With Maoists

According to reports, one of the villagers said he was allegedly beaten up by police personnel with rods and gun butts, an allegation the inspector general said he would look into. 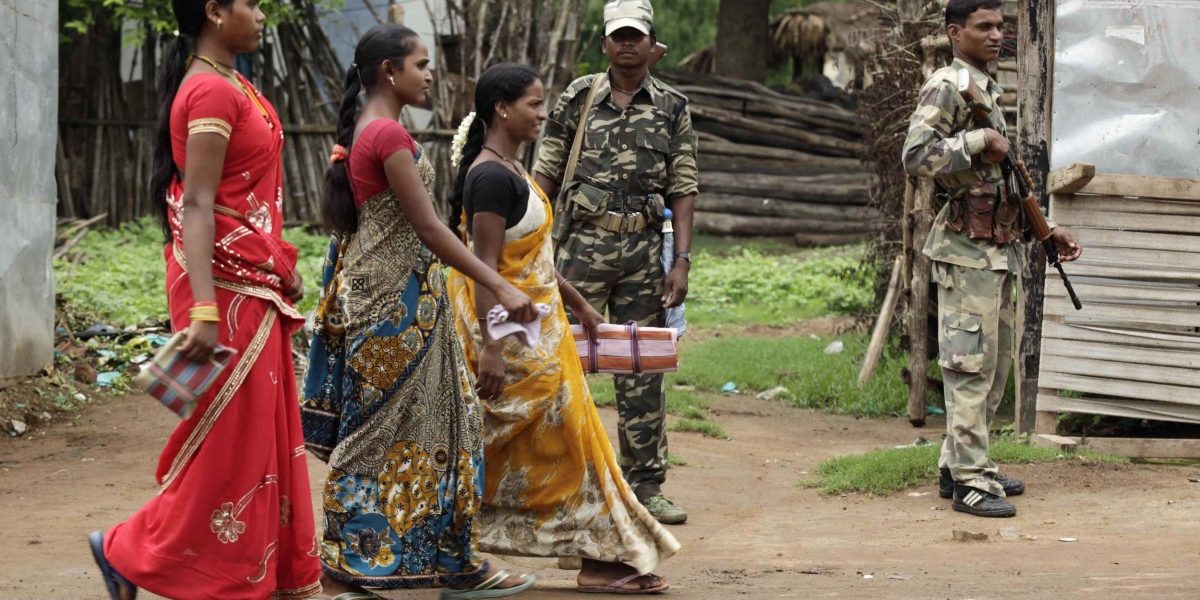 New Delhi: Some villagers were allegedly beaten up by police personnel in Teklagudam village in Chhattisgarh during an encounter between Maoists and security forces on Saturday which killed and injured dozens of security forces personnel, the Indian Express reported.

Teklagudam village was the first site of the gunbattle between Maoists and security forces on Saturday, sources told the daily. Then the Maoists chased the police personnel outwards – towards Jhiragaon, which is hardly 1 km from Teklagudam, where 14 bodies of security personnel were found on Sunday.

One of the villagers, Mangdu Barse, 20, told the daily when he had ventured out of his house to pick forest produce on Saturday, he was allegedly beaten up by police personnel with rods and gun butts. He said he was one of the few who stayed back in the village till late.

Another resident of Teklagudam, Bhima Korsa, 29, told the Indian Express, “When we saw the police personnel approach, we locked ourselves in our houses. Those who didn’t get beaten up. After a few hours, we heard the noise of heavy firing and we fled.”

According to the report, during the gunbattle, around 150 locals of Teklagudam escaped into the forest. Then they went to Poovarti, which is around 30 minutes from the village on the other side of hills. The locals told the newspaper they were worried about being caught in the crossfire between police and the Maoists.

“Some of us went to Poovarti, some only went inside the jungles. We returned only on Monday, after the security personnel had left the area,” Ramesh Korsa, 17, told the daily. A school student in Jagargunda, Korsa, told the daily he was among the last few to flee.

Some young men told the daily they were scared of police retaliation.

Flag of unity should be hoisted high again- Cm Prachanda