“Using the current strategy for further militarisation in Bastar – which is already amongst the most militarised areas in the world – is a surefire recipe for disaster.” 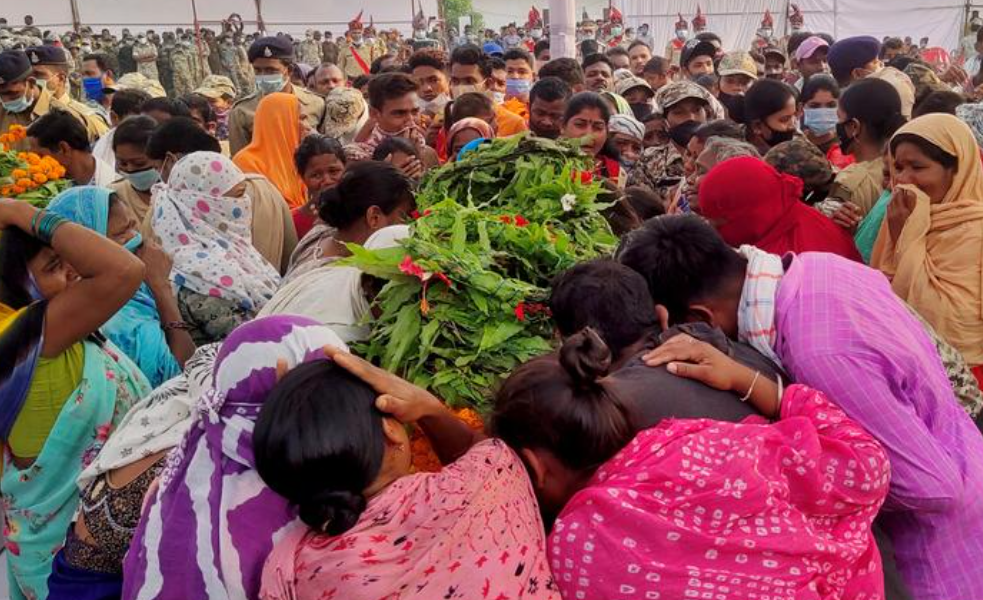 Relatives mourn around a coffin of a jawan who was killed in an attack by Maoist fighters, during a wreath laying ceremony in Bijapur in Chhattisgarh, India, April 5, 2021. Photo: Reuters/Stringer

The Wire Staff
New Delhi: Human rights body People’s Union for Civil Liberties (PUCL) has condemned the loss of lives during an encounter between Maoists and security forces in Chhattisgarh. At least 22 security forces personnel were killed and 30 others injured on Saturday in an encounter with Maoists inside a forest near Jonaguda at the border between Bijapur and Sukma districts in the state.

In a statement issued on Monday, the PUCL said, “What causes us great concern are reports that injured security people seeking refuge in houses were ambushed and stabbed to death. Such use of violence against injured persons – irrespective of whether they are security persons or others – is unacceptable and is to be condemned. This goes against the principles of humanitarian law, which is enshrined in national and international law, governing the basic rights of combatants in any conflict situation.”

According to PTI, separate joint teams of security forces, over 2,000 in number, including the Central Reserve Police Force (CRPF), its elite unit CoBRA (Commando Battalion for Resolute Action), the District Reserve Guard (DRG) and the Special Task Force (STF), had launched a major anti-Maoist operation from Bijapur and Sukma district, on Friday night. The operation was launched from five places – Tarrem, Usoor and Pamed (Bijapur) and Minpa and Narsapuram (Sukma).

Reports added that at least 400 Maoists were involved in the attack.

Union home minister Amit Shah said a “befitting reply will be given to the attack” in Chhattisgarh at an appropriate time. Chhattisgarh chief minister Bhupesh Baghel has said the martyrdom of the jawans will not go in vain, and the anti-Maoist operation will be intensified.

Also read: How Governments Avoid Due Process by Declaring Groups as ‘Front Organisations’ of Banned Entities

Condemning the use of violence, the PUCL said, “We also reiterate our strong belief that the Maoist violence in central India needs to be addressed through political means, and not military operations, and also call upon all parties – the state and central governments and the security forces, and also the Maoists to immediately cease military operations and all other hostilities in order to initiate a process of dialogue to resolve all conflict issues.”

The human rights body raised concerns over the extensive militarisation of the area causing daily harassment of ordinary citizens by paramilitary forces, and alienation of local tribals, who are caught in the middle of the conflict between the security forces and the Maoists.

In the past few months, there has been an alarming rise in the number of civilians killed as police informers by the Maoists. According to the Times of India, 50 civilians in five states were killed by Maoists in six months, with Chhattisgarh being the worst-affected state. The report cited police officials who said while many are killed under the suspicion of being police informers, some who have left extremist ranks and joined the mainstream after surrendering also become targets.

The PUCL added: “At the heart of the conflict that has engulfed the tribal areas of Bastar are issues about the nature of development, expansion of industries and mines, all of which threaten to displace and dispossess millions of Adivasis. Using the current strategy for further militarisation in Bastar – which is already amongst the most militarised areas in the world – is a surefire recipe for disaster.”

It further said, “Peace can come not through military camps and military style operations. It can come only when both the state and its forces and the Maoists acknowledge the primacy of Adivasis communities and initiate a genuine dialogue between them and with the local populations about the nature and direction of state-sponsored development in the area.”

Flag of unity should be hoisted high again- Cm Prachanda