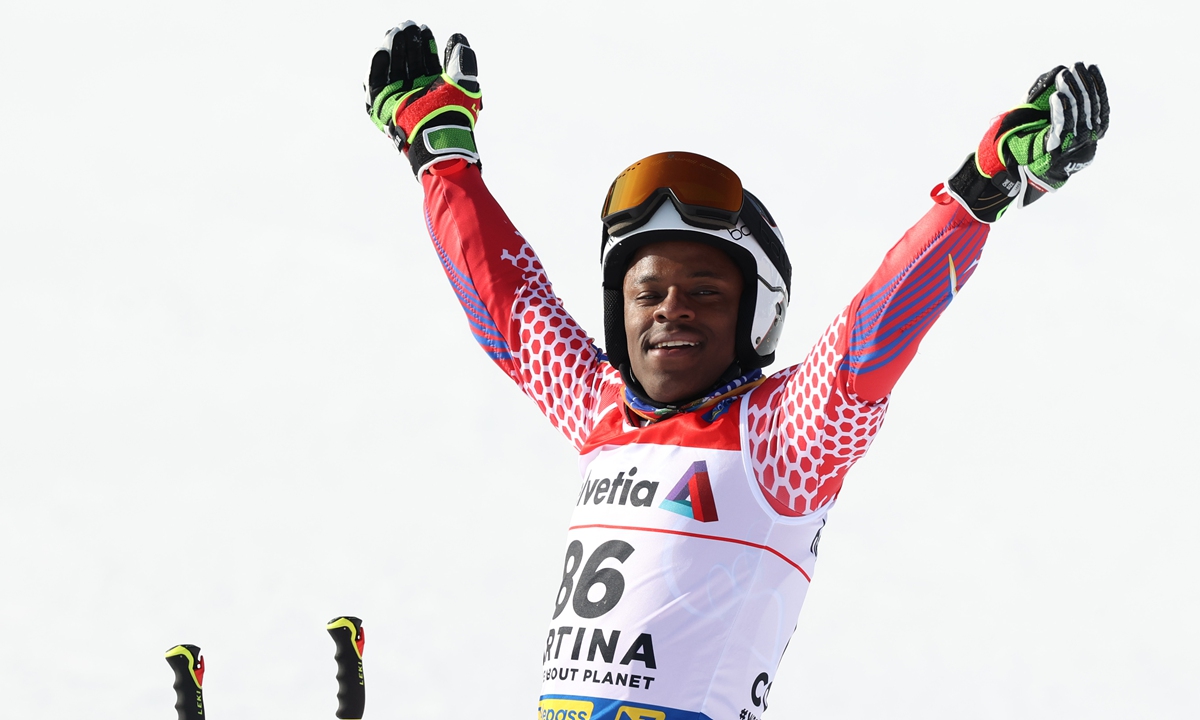 After three competitions in the giant slalom event at the National Alpine Skiing Centre in the Yanqing district in Beijing, Richardson Viano, Haiti’s first-ever Winter Olympic athlete, has wrapped up his “happy” and “incredible” China trip and returned home to unite with his parents and continue training.

“Using one sentence to describe it, I’d say it was such an amazing experience for me and for my country,” sitting in his house located in the French Alps, Viano shared his experience with the Global Times through a video call on Wednesday.

After showing up as the only Haitian athlete and flag bearer at the February 4 opening ceremony in Beijing, Viano began his “exciting” Olympic village life that had lasted for the past two weeks.

“When I was young, I saw those world champions that I admire on TV, and now here I was, surrounded by them. We shared many fun moments, training slopes.”

Regrettably for his first trip to China, the pandemic prevented Viano from exploring the city as he wished to do, although there was a silver lining: “Living in Olympic village and competing in the Games were an awesome experience that I really want to do all over again.”

Viano’s home Briançon is famous for its large ski resort, where his father is a ski instructor. The 19-year-old Haitian skier first moved to France when he was adopted by his parents at the age of 3. He had been skiing for France until three years ago, when the Haiti Ski Federation asked him to represent the country for Beijing 2022.

Speaking of the opportunity he was given, Viano said, “When people mention Haiti, they often think of poverty and catastrophe, and I hope my own experience will let more people know a different Haiti. And also through participating in the Beijing Winter Olympics, I hope I can inspire more young Haitians to know winter sports.”

It seems Viano has succeeded.

Jean-Pierre Roy, president of the Haiti Ski Federation, told The Associated Press that Haitians’ interest in the sport has taken off since Viano’s pioneering participation in Beijing 2022.

Talking about his results, Viano told the Global Times “I am already very satisfied concerning my debut in the Winter Olympics.” Viano noted that he will continue to represent Haiti at the 2026 Winter Olympics and that he hopes to bring home a medal next time.

And it is not the only country to do so.

In addition to Haiti, Saudi Arabia also made its Winter Olympic debut in Beijing represented by athlete Fayik Abdi.

Additionally, athletes from Caribbean countries such as Trinidad and Tobago returned to the Winter Olympics after a 20-year absence.

Abdi told the Global Times that he did meet some very interesting people, many of whom he considers his friends now.

Jamaica also sent a delegation of 20 representatives including nine athletes, the country’s largest delegation to participate in a Winter Olympics, to compete in the four-man, two-man and women’s monobob at the Games. The country also competed in Alpine skiing for the first time, represented by athlete Benjamin Alexander.

“On a scale, this [Beijing Olympic Winter Games] is also absolutely my first international competition ever in life,” Alexander, who participated in two giant slalom events at Beijing 2022, said in a video call with the Global Times.

“I mean I’ve been DJing in front of thousands of people for years, but I have never done this in front of a TV with millions of viewers watching.”

“What I hope is that my story can actually inspire people, especially people in China where I know the government has achieved bringing 300 million people into winter sports. If I can start something at 32, and within six years will be able to go to the world stage, [it shows] that the things you think you can’t do, you can do.”