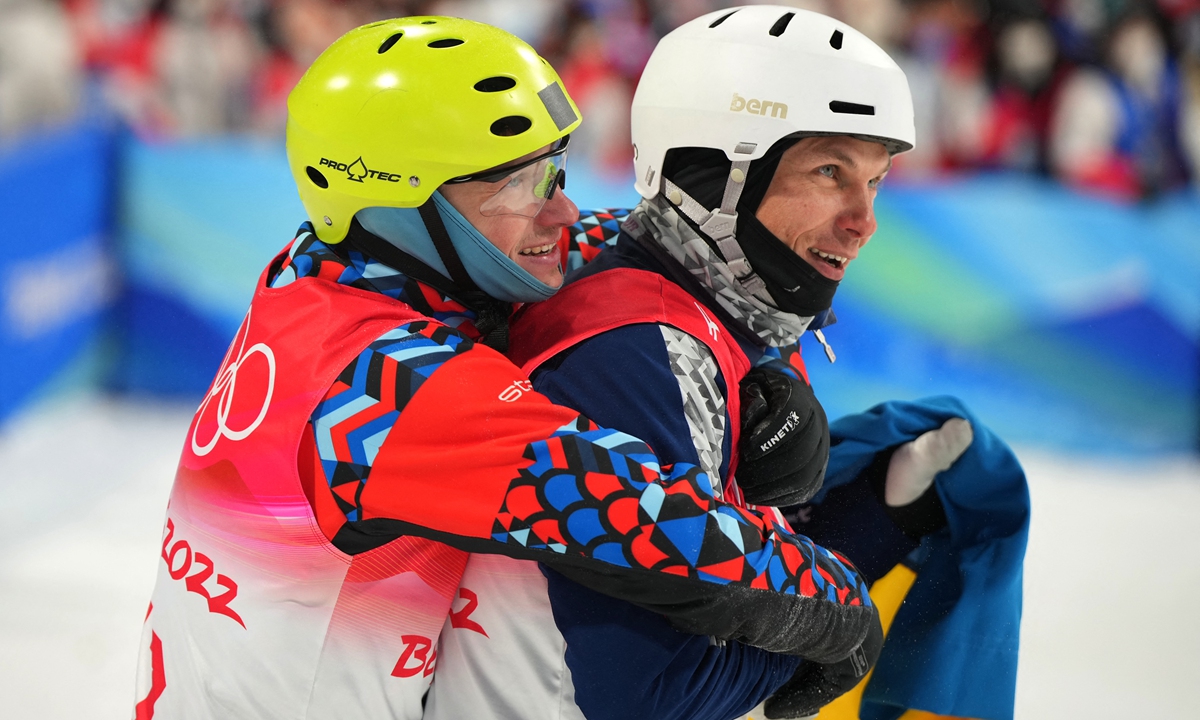 “It is very pleasant that we were caught on camera showing mutual support and friendship between peoples,” Russian freestyle skier Ilia Burov told the Global Times after a picture of him hugging Ukraine’s Oleksandr Abramenko went viral on the internet. “The Olympics are not about politics. The Olympics are, first and foremost, about sports,” said the Russian athlete. The hug between athletes from two countries that are currently at odds happened on February 16 when Abramenko ended up taking second place in the men’s free ski aerials and won Ukraine’s first medal at the Beijing 2022 Winter Olympics. Burov took home a bronze medal in the same competition. The picture of their hug also appeared in the short video played at the closing ceremony of the Beijing Winter Olympics. Burov told the Global Times on Monday why he hugged Abramenko. “Because we are friends. I warmly congratulated him on his Olympic medal. Just like how we stood on the podium in South Korea [in the Pyeongchang 2018 Winter Olympic Games], where we also said friendly and kind words to each other.” “It all started in South Korea, when Sasha [a nickname for Oleksandr Abramenko] hugged me with his country’s flag,” said the Russian athlete. Burov mentioned that he and Abramenko get in touch with each other quite frequently. “We write to each other and call each other,” he said.The Russian athlete noted that they have known each other for many years.“We got to know each other when we started freestyle skiing. We all got acquainted… and to this day, we still have this brotherly friendship among brotherly peoples. We are always in friendship and support each other,” he said.This hug touched many hearts in China as the hashtag “The hug between Russian and Ukraine athletes” earned over 150 million views, with many hoping this hug is a signal of peace, as relations between Russia and Ukraine are currently tense.The Moscow Times reported in January that Ukraine’s sports minister said Ukrainian athletes should avoid standing next to their Russian counterparts at the 2022 ­Beijing Olympics.“There is a political point of view, saying what we did was wrong,” Burov mentioned, noting that the Olympics are not about politics. “The Olympics are, first and foremost, about sports. There should be no politics. It is always nice to have support from the Olympics and sports… It is very pleasant, of course, that we were caught on camera showing mutual support and friendship between peoples.”Burov’s younger brother, Maxim, is also a freestyle skier who competed during the Beijing Games. “It is great to come to the Games with your family. Also, coming with my brother to the Olympics, the brotherly competition can always spur each other on,” Burov said.Thirty-year-old Ilia Burov has three children, including a girl who has just started freestyle skiing.